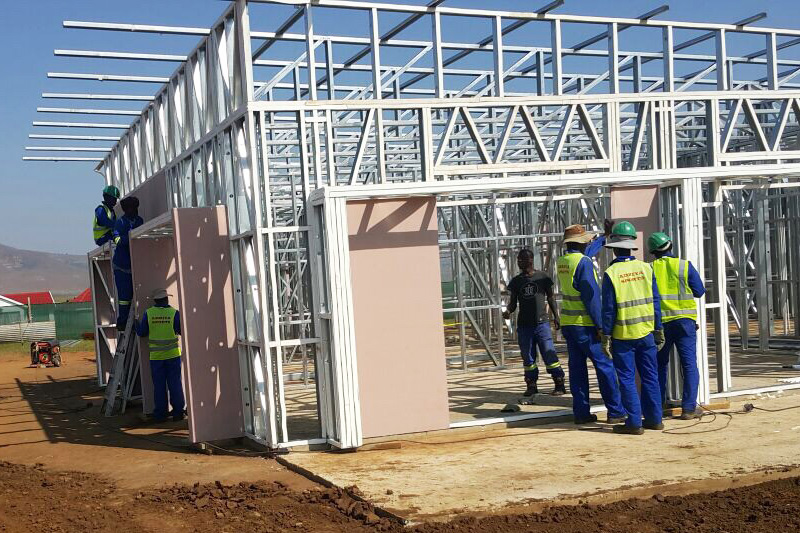 In 2008 UFCC introduced the UCO SolidWall Building System to the South African market. The system is an innovative Alternative Building Technology (ABT) which is a solid, non-load-bearing wall system suitable for residential, commercial and educational buildings.

The UCO SolidWall Building System is a certified Industrial Building System (IBS), which is made up of UCO Flexabord fibre cement sheets that are fixed onto lightweight steel studs and infilled with a lightweight concrete mix. The system meets fire-rating, acoustic and thermal insulation, wet application impact strength and robustness requirements.

In March of 2011, UFCC’s vision to have the UCO SolidWall System tried and tested in local projects became a reality. No fewer than five schools were built using the system and more project developers quickly followed suit. This included the Anistemi Retirement Village in Klerksdorp which is one of the biggest domestic light steel frame developments using the system in South Africa. Once complete, the development will amount to an impressive total of 231 units.

In March of 2012, Transgariep Infra (TGI) was awarded a tender to build a school in Olievenhoutbosch, Gauteng. Razorbill, a UCO SolidWall Building System licensee, was sub-contracted to complete the project and did so using light steel frame along with the system. This project, a great success, turned heads at the Gauteng Department of Education, not only because the school was built using an ABT, but also because the project was completed well within the allocated timeframe of 24-30 months for a conventionally built school. The Olievenhoutbosch project was completed in a mere eight months.

Based on this success, Transgariep Infra were awarded another school project, Shoshanguve, the first ABT school that is totally off-grid, uses solar energy and has a sewage recycling plant. This 4500m2 project was also completed in a record period of eight months.

The UCO SolidWall Building System obtained is Agrément certification in September 2012, a certification that provides assurance that a product is fit for purpose through an objective assessment by an independent organisation with over 30 years’ experience in evaluating non-standardised building and construction products.